More than 800 officials work in Division I. Only 10 are invited to preside over the Final Four. Mike Roberts, through his 20-year officiating career, has never received that coveted phone call. Can he survive the madness this year and advance to Dallas?

As a high school senior, Lauren Hill was diagnosed with a diffuse intrinsic pontine glioma, a tumor that wraps itself around the brain stem and squeezes off vital functions. A recent MRI revealed she might have only months to live.

Ten thousand people stared at the girl in the hot pink sunglasses. She wore gray for brain cancer awareness, like most of her fans, and blue Nike high tops, like the rest of her team. She smiled and waved to familiar faces.

The bright lights, the loud noises of this arena – they could trigger headaches. She wore the sunglasses to dim the glare and hot pink earplugs to dampen the sound, but she worried this crowd would think she wanted to look like a celebrity.

Through the earplugs, she heard the muffled voice of the announcer: “Five-foot-eleven forward from Greendale, Indiana…” 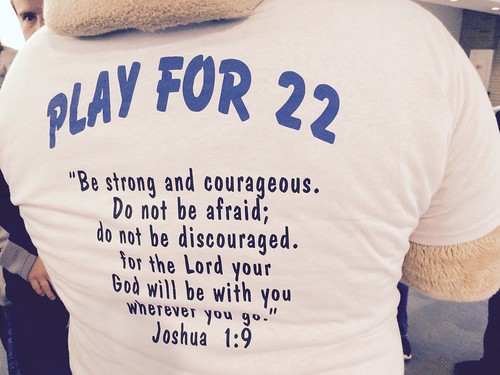 The crowd’s roar drowned out her name. She didn’t want to look like a celebrity, but there was no question: Lauren Hill was the star of this show.

She had been dreaming of this day for months: the first game of the season for her team, Division III Mount St. Joseph University, and the opposing Hiram College. The first college game of her life.

She had been practicing this play for weeks: a left-handed layup, a shot that not long ago seemed simple. Though she is right-handed, it was designed for her left side because her brain cancer has weakened the right. Nothing is simple anymore.

Still, Lauren was determined to make this shot. She slipped off her sunglasses and joined the other nine starters on the court. She pulled up her kneepads on each leg and took a deep breath. The whistle sounded.

Mount St. Joseph won the tip. One pass, then another. Only seconds had clicked by before Lauren found herself holding the ball under the left side of the basket. Eyes raised, she lifted her left knee along with her left arm, then let the ball fly.

She was the girl who teachers moved to sit between two squabbling middle-school classmates. Her laid-back nature made her the mediator among her friends, someone who listened to both sides and doled out advice. She laughs when she reveals she has been compared to Dory, the Good Samaritan of the sea in the Disney movie “Finding Nemo.” As the cartoon fish famously says, “Just keep swimming.”

Friends, coaches, family – they describe Lauren as loyal and loving and indecisive. “I weigh both options of everything,” she says. “It’s really, really difficult because I’m very, very indecisive.”

Her mom, Lisa, nods in agreement. Like most teenage girls, “she’s horrible to go shopping with,” she says playfully. Little decisions, such as choosing the color of a shirt, can become a chore.

Lauren wasn’t even sure she liked basketball at first. She joined the team in sixth grade with reluctance after her dad asked her to try it “for just one year.” She was late to the game compared to the other girls, and insecurity set in. Already a soccer player, Lauren debated whether to continue with basketball after eighth grade.

That’s when Lawrenceburg High School coach Zane White, then in charge of the junior varsity team, stepped in. Lauren wasn’t a skilled player at the time, but she had the length and, more important, she had the attitude. To White, she seemed like just the girl his team needed – and he made sure she knew that. “I felt like she was going to be a role model,” White says. “I thought it was important to keep a kid like that around.”

Her love for the sport and the close-knit team blossomed, and so did her skill. Lauren – No. 22 for the Tigers – became known for her hustle, for her ability to catch the ball at the post, outlet it and still beat everyone else down the court. “That’s how hard I ran,” Lauren recalls. “I ran hard every time until I was tired and ready to come out.”

Mount St. Joseph first-year head coach Dan Benjamin pulls his team together for one last cheer Sunday morning at the campus send-off. “I will tell everybody until the day I die that Lauren Hill has made this program better than I ever could,” Benjamin said.

She was surprised to see a coach watching her as a high school junior. “I got scouted! I got scouted by a college coach!” she told her dad, Brent, when she got home. She knew he would be proud.

After visiting Mount St. Joseph, a private, Catholic university outside Cincinnati about 25 minutes from her home, Lauren knew. For once, the decision came easily.

A simple search on the team’s website revealed that No. 22 for the university was graduating. Lauren’s jersey number from high school was about to be available.

More than 200 basketball teams shipped No. 22 jerseys to Cincinnati in a demonstration of solidarity with Lauren and Mount St. Joseph. Lauren will sign the jerseys, and they will be auctioned off, with all proceeds benefitting pediatric brain cancer research. Some teams plan to buy back their jerseys to hang in locker rooms for motivation.

The women on the Hiram team sported the number of the opposing player on their warm-up T-shirts. Glittering homemade signs flashed it at Xavier University’s Cintas Center, where the game was moved to accommodate the thousands seeking a seat. More than 200 college basketball teams shipped No. 22 jerseys to Cincinnati. And the hashtag #Playfor22? It was used more than 14,000 times on the day leading up to the game – by NCAA schools and conferences, by the people of Cincinnati, by such sports notables as WNBA star Candace Parker and Fred Jackson, a Buffalo Bills running back who, like Lauren, attended a Division III college.

Tickets for this game sold out in 40 minutes. Those who missed out on them tuned in on FOX Sports Ohio. Reporters and photographers – 115 in all – lined the court. Inquiries came from journalists as far as Taiwan, Greece, Turkey.

In the days before the game, letters and photos and phone calls poured in. In a voicemail, a California man struggling with ongoing health issues said her story had renewed his will to live. She was his inspiration.

To the world, that is what this 19-year-old has become. The Inspiration. The Fighter. The Hero. Delhi Township declared Nov. 2 as “Lauren Hill Day.” Legendary former Tennessee coach Pat Summitt hugged her at halftime when Lauren received the Pat Summitt Most Courageous Award. Hiram players wiped away tears when celebrating Lauren at a Saturday night pregame dinner with Mount St. Joseph.

Lauren and her team practiced her layup play for weeks leading up to her first game. She is right-handed but had to execute it with her left because her cancer has weakened the right side of her body.

And then Sunday afternoon, seconds into the game, there were those same opponents, guarding Lauren Hill. In the arena, everyone – even her competitors – hoped she could make her shot.

The player known for hustling down the court suddenly couldn’t keep up. She struggled to catch the ball and fell down more than usual. Coaches wondered what was going on. Lauren wondered, too. It was October before Lauren’s senior season, and she was expected to be a leading player on the Lawrenceburg team. But her coordination only worsened, and she began noticing numbness in her tongue and a tingly sensation on her right side.

Medical tests revealed the worst: a diffuse intrinsic pontine glioma, or DIPG, a rare tumor that wraps around the brain stem like a jellyfish, eventually squeezing off vital functions. It is inoperable, and there is no known cure.

Lauren dressed as a “warrior in gray” – the color of brain cancer awareness – for Halloween. She dressed her toy poodle, Sophie, as a dragon.

Lauren, the teenage girl who always weighed all options and labored thoughtfully over decisions, was thrown into a situation for which she had no choice. The diagnosis was cruelly definitive. Incomprehensible. Surely, there would be some miracle.

As a high school senior, Lauren continued to play basketball while going through chemotherapy. She had committed to Mount St. Joseph and was determined to follow through on that promise.

But the chemo and radiation didn’t work. The tumor only grew. This fall, as a freshman at Mount St. Joseph, an MRI revealed Lauren might not have many months to live.

Mount St. Joseph coach Dan Benjamin agonized about doing something, anything, for Lauren. The team’s first game of the season was scheduled for Nov. 15. Lauren dreamed of playing in a college game, but would that be too late?

Benjamin got a waiver from the NCAA to move up the team’s season opener against Hiram. Never mind that it cut into crucial preseason training time. This season, he declared, his Lions would “play for 22.”

Lauren, meanwhile, adopted a mission. DIPG typically hits children between the ages of 5 and 10 – kids too young to explain their symptoms and educate others. But she could communicate. She would be their voice.

Lauren and her family opened their home to television stations. She spoke at community events for The Cure Starts Now, a nonprofit organization in Cincinnati dedicated to finding the cure for pediatric brain cancer. On Friday for Halloween, she dressed as a “warrior in gray” fighting DIPG, and dressed her toy poodle, Sophie, as a dragon.

Despite battling extreme fatigue, severe headaches and vertigo, Lauren continues to attend practice 2-3 times a week. She turns in handwritten classwork when she can – computer screens trigger the headaches. She likes her Christian Studies class best for the comfort it brings. As for her major? The teenager has never decided.

Ten thousand people stared at the ball rising toward the basket.

It was only the first play of the game, but it mattered. Lauren didn’t have the energy to last long on the court. She might not get another good shot.

Later, after the game, Lauren would tell the crowd through tears: “This is the best day I’ve ever had.” She would get a hug from perhaps the biggest legend her game has ever known. Her team would leave the court with its first victory of the season, toppling Hiram, 66-55. Some of those details may be forgotten. But not that first shot. It’s the moment her family, coaches and teammates will recall in intimate, uplifting detail in the uncertain days and weeks that lie ahead.

Because in that moment, 10 seconds into the game, Lauren’s shot bounced off the backboard. Then it slid through the net.